All these things that I've done...

It's been a while since I've actually posted a non-poem entry. Actually, it's been a year since my last YIR.

On the relationship front, a good amount happened this year.

Other than continuing my policy of not dealing with girls that start with an "Alice" sound in their name (They are the devil) - it served me pretty well in 2011.

When we last left off in 2010, I was in love with a girl named Julie, and was planning on moving back to MI to be with her (And everyone else) in March. Well, we broke up at the beginning of February. The strain of a long distance relationship just took it's toll, and I am sure depending on who you ask we might have conflicting stories about what happened. Needless to say I think we were in different places (In more ways than one) and she's moved on to another relationship. I hope she's happy and that this person values her. I do miss her. At this point we hardly speak.

My ex Jessica also came back into my life for a short span. We had been talking on the phone for a while after not speaking for a good amount of time. She was going through a rough patch and I was trying to be a friend, and I like to think that I was helping her out. When I went home to Michigan in May we were able to spend some time together. I would be lying if I said this contact didn't rekindle some feelings for her, but it was all for naught. Eventually talks broke off, and the last I heard from her in July was that she was dating someone and in a "Christian Relationship" - whatever the hell that is. So, good luck with that too.

Other than that, Michelle and I have hung out a few times over the past few months. We went to the dog park, HHN, and then dinner one night. It was never under the premise of dating again, we were just trying to hang out as friends. Personally, I think we hit it off pretty well this time around. She's one of the few purely benevolent and well-meaning people that I know, and I saw something in her that I didn't necessarily see the first time we were dating and lived together. It's hard to look back on that time period in retrospect, because I was a complete mess. I was just destroyed and I think it's ridiculous to expect her to pick up the pieces. At that time, I had no business dating anyone. I did love her, but something in me couldn't quite turn the corner with it - it just felt like it was there but far away at the same time. It was there for us, but it was something that I had to grow into, or maybe heal enough into. I mean, two girls both banging other dudes when dating them (In a row, see the "Alice" comment above) - I guess it's a tall order for anyone to overcome anyway. I recall the time we lived together fondly, but sadly it just wasn't meant to be.

I will admit, after we had dinner one night, I was pretty shocked to see her FB status update to "In a relationship". Like I said, I didn't really have an ulterior motive for hanging out with her, but I have to confess it did sting a bit. Okay a lot. Funny thing is I always imagined certain people in my past would feel the same sting if they found out I was with someone and happy.

So, I start 2012 single yet again. Sweet. I would like to think that a 33 year old with a steady job, a car, reasonably good looking, articulate, disease-free, etc. would be in demand, but apparently not. I refuse to settle. More on that in the future.

So, with all that said. Creatively I am devoid right now. There is no poetry in my brain, and I haven't written anything in a long time. I don't even have any scraps to work with. It's pretty bad when you are using the LACK OF INSPIRATION as INSPIRATION, and now even that well has gone dry. I miss going to my poetry meetings, which I haven't been able to attend...

I plan on going back to actually WRITING for this page and will hopefully get around to fixing it. So, we'll see.

Barnes and Noble decided to outsource ALL of their digital support overseas. Soon after I agreed to transfer to Napster for support, but had already been hired at my new job...

I work for -C o m c a s t- now doing tech support, and I work 3:30pm until 12:00am midnight, every day but Thursdays and Sundays. Basically I work in a call center. I like my job and personally I think I am good at it, but not in the way that they want me to be. In that regard I'm actually not very good at my job, and I have the impression that I suck at it. Some people get into a flow and they can meet all the metrics and stats the company requires. I just like helping people. My specialty would be helping the 90 year-old grandma program her remote for her TV. All of my quality and surveys are great (People love me) - but I find it almost impossible to:

1. Look up someone's account
2. Listen to their issue
3. Attempt to fix their issue
4. Wait for box/modem/router/computer to reset and see if the problem is fixed
5. Answer any additional questions
6. Attempt to sell them something
7. Leave notes to document the call

... all in 9 minutes and 28 seconds - 6.5 "Calls per productive hour" - To be honest that is pretty fucking ridiculous. Yet there are people who do this on a consistent basis. Many of the metrics are really luck of the draw when you break them down (First all resolution, customer surveys, etc) - The system is designed to make people fail, and it has made me loath to continue working in a call center. Sometimes the only thing you do wrong is answer the phone. I am trying to transfer to another part of the company (I love the company, just not the call center) - I love helping people, but that is not what the company wants from me. They want me to get them off the phone as fast as possible. So, one way or another this will be my last call center. I am hoping to get a better schedule (Days) come March, and if I do not, well I may need to re-examine what I am attempting to do with this place. I have checked the job postings but there isn't much around here in Orlando.

At one point, I had lost 30+ lbs this year. Most of that is still gone, but I have gained some back over the holidays (Sad face) - I got really sick at one point and I had to up my caloric intake. This year should be better once my diet gets back to normal.

On the home front, I moved twice this year. Out of the apartment in Orlando near Universal to Apopka, then back to Orlando. I live there for a few months, and it ended up being too stressful (Pot smoke and domestic disputes aren't for everyone) and too far away (1 hour commute one way) to my job. I moved back to Orlando in August. Apopka was in the absolute middle of nowhere. I like where I live now.

I got Cody from someone on Craigslist in February. I knew that I was going to be moving out the apartment and that Michelle would be taking her dog Chewy with her - I had grown pretty attached to him so I needed one of my own. Best $40 (Rehoming fee) that I ever spent. 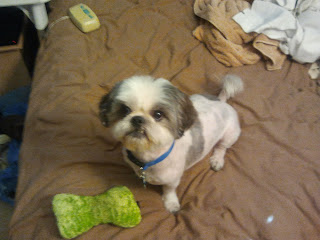 It wouldn't be a stretch to say I wouldn't have made it without him. He's been the glue holding me together this year. I love him so much, he's such a good dog.

Well, I think last year was a transitional year for me. Many things stabilized that had been chaotic before hand. I complain about my job but at least it's a steady paycheck. I really like the company but I have to get out of the call center. It's killing me.

I am really looking forward to the movies in 2012. Should be a great year for film.

1. Get some kind of direction. Any nudge would be great.
2. Get healthier, I laid the groundwork for losing more weight and feeling better overall. I need to cut down on the Red Vines :)
3. Figure this job thing out. Get out of a call center - somehow, someway.
4. Find someone. There is only really one girl that I know right now that I would date (yes, you) - but I might need to meet someone else who I don't know yet.
5. Let things go. I need to let many loose plot threads in my life go.
Posted by deaDpixeL at 1/01/2012 01:25:00 PM